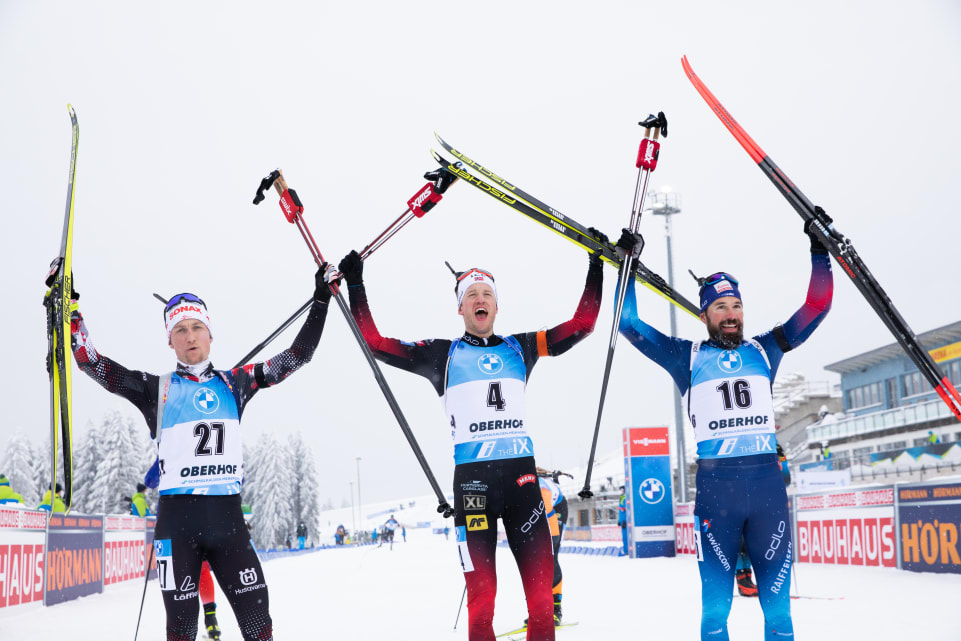 Our very own Omega 3 of Norway ambassador, Tarjei Boe (https://tarjeiboe.com/), seems to be having a comeback this season! In December, he won his first gold medal in the Biathlon World Cup since 2017 and has continued to place well throughout the World Cup events of this season so far, and has even won a second Gold medal this past Sunday!

Tarjei Boe is a profession Norwegian Biathlete and one of our brand ambassadors, who has two Olympic medals and eleven World Championship wins under his belt. We are very proud of his achievements and cannot wait to see what else this season will bring! 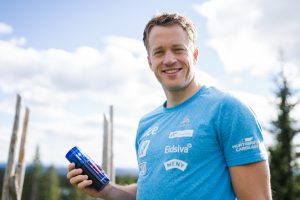 Tarjei (born ’88) has been cross-country skiing almost his whole life and was very successful early on. He won his first gold medal at his first Junior World Championship in the US in 2006 and his first Olympic gold medal in 2010 at the Winter Olympics in Vancouver. This sporty upbringing also lead his younger brother, Johannes, to compete as a successful Biathlete, winning gold at the Winter Olympics in 2018.

Biathlon is kind of the national sport in Norway, where it originally derived from the Norwegian military, who used cross-country skies to patrol the borders. It became an official sport in 1861 and nowadays consists of cross-country skiing in combination with rifle shooting. There are different disciplines from individual races and sprints, to group and single relays. The races can be long and the athletes require a lot of endurance, strength and focus to both complete the required distance as fast as possible, while keeping their cool during the shooting part.

Summary: This season looks to be Tarjei’s comeback as he already has two gold medals under his belt and the season is far from over! After almost three years, Tarjei won his first gold medal in early December at the 10 km sprint in Kontiolahti in Finland at the second event of the World Cup series this season. He has managed to bag more medals throughout the following races and last Sunday he won gold again, this time at the 15 km mass start competition in Oberhof, Germany.

After easing into the season, where Tarjei did not step on the podium in the opening event in early December in Finland, he turned the season around and now already has a total of 8 medals, as well as other very good placements to his name, which could make the 20/21 season the year of Tarjei’s comeback!

Next to his win in the 10 km sprint in the second event of the season in Kontiolahti, he also won the 4 x 7.5 km relay competition with the Norwegian team together with his brother Johannes, Vetle Christiansen and Sturla Laegreid. The team finished in just 1 hour and 16 seconds and beat the second team from Sweden by almost 40 seconds!

The third event of the season took place in Hochfilzen in Austria, where Tarjei came 4th in the 12.5 km pursuit competition just behind his brother Johannes, and won 2nd place in the 4 x 7.5 km relay competition, this time with a slightly modified team consisting of his brother Johannes, Johannes Dale and Sturla Laegreid. They finished just 5.7 seconds after the Swedish winners, which is definitely a very good result.

The fourth event of the season also took place in Hochfilzen and proved to be a good one for the Norwegians. In the 10 km sprint, the first 4 athletes were all from Norway, with Sturla Laegreid in the lead, followed by Johannes Dale, Johannes Boe and Vetle Christiansen. Tarjei came in 14th in that race. In the next race, the 12.5 km pursuit competition, he came 7th, slowly improving his performance. In this race, his Norwegian teammates continued to place well. It was in the 15 km mass start competition that finally brought Tarjei’s moment to shine, and he placed 3rd after a German and Swedish athlete, winning his fourth medal of the season.

Continuing in Oberhof Germany, the Norwegian athletes again filled up the podium in the 10 km sprint competition with Johannes Boe and Tarjei as the first two, followed by fellow Norwegian Sturla Laegreid, as well as for the 12.5 km pursuit competition, with Tarjei in the third position and with his 6th medal this season! What a ride it’s been so far and the season has just started, 2021 looks to be Tarjei’s year!

And the next medal is not far. At the following event in Oberhof, Tarjei comes second with this team in the 4 x 7.5 km relay competition, just 4.2 seconds behind the French winning team. In the final race of this event, on the 17th of January, Tarjei then wins gold again and wins the 15 km mass competition, bringing home 8 medals so far this season.

Make sure to follow along the rest of the season to see what other heights Tarjei will reach this year!

Tarjei Bø Victor in Oberhof!

How pro-athletes use omega – 3 in their training

To fuel his body with all the necessary nutrients during the intense training sessions and the demanding competition season, Tarjei takes 6 to 8 capsules of our omega – 3 supplement each day. This helps him to maintain his healthy diet, even when he is travelling. His diet is an important part of the training regime and mainly consists of a lot of carbohydrates, fresh fruit and raw vegetables. Fresh fish is also a vital component, but when he is not able to access it easily, like when he is in a training camp in the alps, the omega – 3 capsules help him to maintain the necessary intake of omega – 3 – fatty acids that are so important for athletes during training.

Cross-country skiing at a competitive level is a very demanding sport and requires intense training and preparation. Even during the off-season between April and November, these athletes only take a few weeks off.

Another one of our ambassadors is the Swiss Olympic rower Barnabé Delarze (https://www.delarze-rowing.ch/). He trains about 25 to 30 hours a week and also uses our Omega 3 of Norway supplements to maintain his body fit and healthy. Like Barnabé explains, when training so hard, your body is under constant stress and often is inflamed as well. Your immune system is weakened and taking supplements like omega – 3 capsules are essential to help your body recover from these inflammations (https://norwayomega.com/blog/the-top-3-benefits-of-omega-3-a-powerful-anti-inflammatory/) and to strengthen your immune system (https://norwayomega.com/blog/how-omega-3-fish-oil-can-boost-your-immune-system/).

Tarjei Bø  on Norway Omega

Omega – 3 is beneficial for anyone!

While Olympic athletes like Tarjei and Barnabé rely on omega – 3 during their trainings, anyone who does exercise can benefit from taking these supplements. We have written a whole article about the benefits of omega – 3 for athletes, (https://norwayomega.com/blog/the-top-5-benefits-of-omega-3-for-athlete/) and we will sum up the most important points for you below.

Omega – 3 contains the essential fatty acids eicosapentaenoic acid (EPA) and docosahexaenoic acid (DHA) which our body cannot produce itself, but we have to consume through our diet. These fatty acids are important for many processes in our body and good for our heart health, as well as cognitive function. A systematic review of studies looking at athletes supplementing with fish oil has found, that it can have positive effect on cognition, hearth health as well as immunity and muscle recovery. Nutrition is an important component of any athlete’s routine and supplements like our products at Omega 3 of Norway can help you to easily fuel your body with all the nutrients it needs, to perform at its best.

But what else does omega – 3 do for your body when you exercise? Here are the top five benefits of omega – 3 for athletes:

The fatty acids EPA and DHA are natural anti-inflammatories and can help your body deal with muscle soreness and even reduce muscle swelling after exercise. They can improve recovery time by reducing the damage done to your tissue by free radicals, because EPA and DHA also work as an antioxidant.

Our body goes through a process called protein synthesis, where it turns the proteins we eat into the fuel that our muscles need to grow and repair themselves. Omega – 3 has been shown to improve this process and therefore could be beneficial for muscle growth.

3. GOOD FOR YOUR HEART & ENDURANCE

Some research suggests that omega – 3 can reduce the oxygen demand of our body during exercise, which means that our body will need less energy during sports. This could improve athletic performance, while also counteracting muscle loss.

Our brain contains a lot of fats and DHA make up 15% of these fats! This fatty acid might therefore play a role in pre-emptive protection of our brain in contact sports, where there is a higher risk of concussions. There might also be a correlation between DHA and EPA and the reaction time of our body.

Fish oil intake has been linked to an increase in fat-free mass in our body, which means that it can have a positive impact on our body composition (fat to lean body mass ratio).

So, as you can see, fish oil or krill oil supplements that contain EPA and DHA are good for anybody, who likes to exercise and wants to make sure, their body gets all the nutrients it needs.

It is difficult to say how much omega – 3 you should take every day, as this dose depends a lot on your individual needs, body, diet and lifestyle. Our athletes however take up to 8 capsules a day to maintain their healthy diet, so feel free to browse our shop (https://norwayomega.com/shop/) to check out our products, or read more about them on the blog (https://norwayomega.com/blog/) on our website.